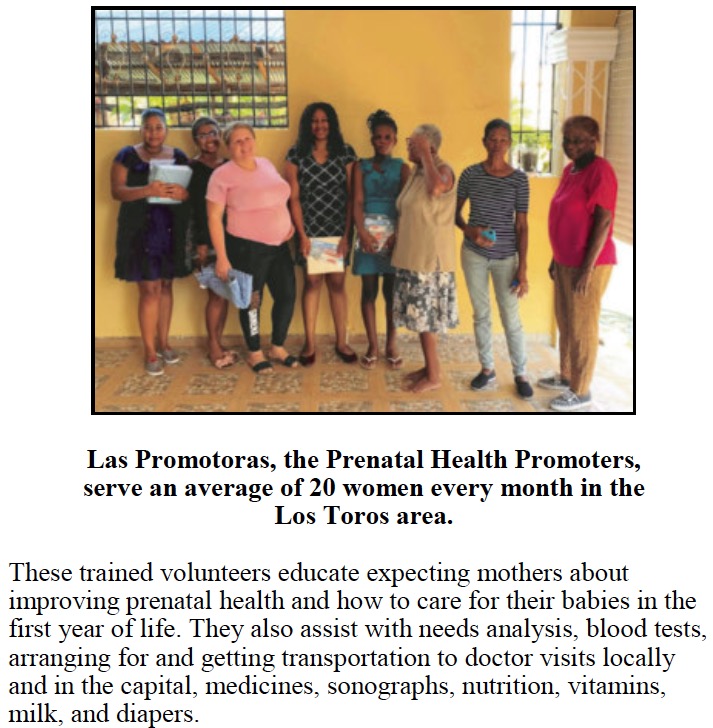 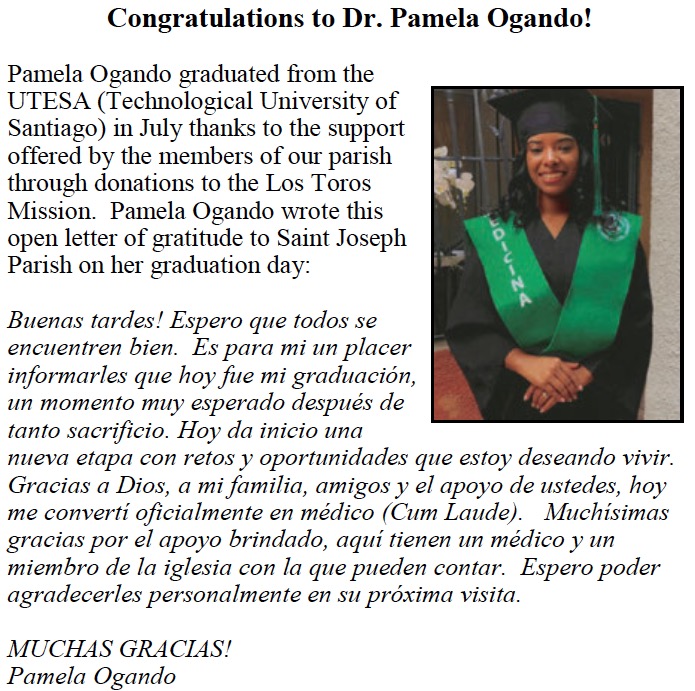 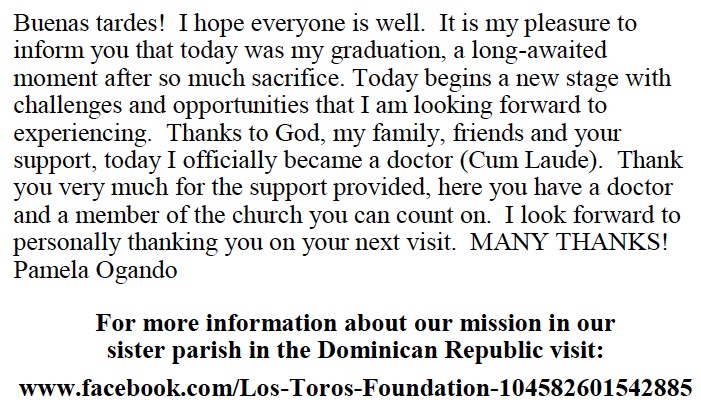 Know Your Brothers and Sisters: A Bit of Dominican History Part 1
If you have been around St. Joseph Parish for any length of time, you have heard that our mission in Los Toros is a partnership of collaboration and solidarity. This is a relationship of mutual trust and respect that grows over time. As we get to know each other, we come to appreciate how very different our daily lives are, but also how our shared gospel values bring us together even with different histories. Catholic Relief Services’ U.S. Operations Partnership Manual expresses our experience: “… parish twinning relationships are an invitation to a whole different kind of relationship, whereby people from opposite sides of this historic divide, come together, get to know one another more fully as human persons, the joys as well as the struggles, the gifts as well as the needs. People on each side are seen as multi-dimensional and partners are very curious and appreciate… things that shape the other—their history (personal, community, and national), their culture, their family life, their faith and the varied cultural expressions of their faith.”

It was believed that all the indigenous people died out after the Spanish conquest (and the massacres, poverty and diseases that followed), but recent research shows that a good number are still there, many of mixed ancestry. Bartholomew Columbus, Christopher’s brother, became the first Spanish governor of the island and founded the city of Santo Domingo in 1496. It was a center for exportation of gold to Spain until the conquest of Mexico when Mexico City became the new center of the Spanish colonies. The shipment of African slaves to Santo Domingo began in 1510. This is the third element in the basic mix of Dominican heritage.

Our first article of this series (November 27 bulletin) covered the indigenous peoples living on the Island when Christopher Columbus arrived through the start of the slave trade. This second article continues with the Colonial Era.

As peaceful as the Indigenous peoples were, things did not go well during the colonization by the Spanish army. Early in the 1500’s, one of the Taíno leaders, Hatuey, fled to Cuba and organized armed resistance against the Spanish invaders. He was captured and burned alive. A priest attempted to convert him to Christianity so that Hatuey could go to heaven. Hatuey asked if there were Spaniards in heaven. When the priest answered, “Yes,” Hatuey refused.

The gold deposits of Hispaniola were running out when Hernándo Cortés conquered Mexico. Most of the Spanish colonists then left the island for the silver discovered in Mexico and Hispaniola’s importance diminished. Only a few thousand “Spanish” settlers remained, many being the descendants of Spanish fathers and Taíno mothers. They then raised livestock to supply Spanish ships that stopped on their way to richer colonies on the American mainland.

By the mid 1600’s, the island was plagued by pirates, based on the Island of Tortuga. They not only raided passing Spanish treasure ships, but also stole livestock from Hispaniola.

The French sent colonists to Tortuga and the northwestern coast of Hispaniola, which the Spaniards had abandoned. In 1697, the western third of Hispaniola became a French possession. Hundreds of thousands of African slaves were brought and forced to work on the sugar plantations. This became one of the wealthiest colonies in the world. The next 200 years were marked by slave uprisings and struggles for freedom.

The most successful resistance against the Spaniards took place on Hispaniola from 1519 to 1534 when several thousand Taínos escaped captivity and followed their leader Enriquillo to the mountains of Bahoruco, in the south-central part of the island. This is southwest of where the village of Los Toros is today.

The very first truce between an Amer-Indian chief and a European monarch was negotiated there giving Enriquillo and his followers their own town and charter.

Simply visit smile.amazon.com, shop as usual, and select the “Los Toros Foundation” as your charity of choice when you checkout. Amazon Smile is the same Amazon you know. Same products, same prices, same service. It’s that easy!

Thank you for your generous support of our parish mission!

UNDERSTANDING OUR MISSION IN LOS TOROS

Our mission in Los Toros is a mission of solidarity. What does solidarity mean? These Principles of solidarity-based partnerships, taken from Catholic Relief Services’ Parish Partnership Manual express it well.

II. Practice mutuality and equality.
True mutuality allows each partner to function from a place of strength rather than weakness. Each acknowledges the wholeness of the other. We must be alert to the historic imbalances of power between the North and the South, and the way that plays out in a relationship. We need to intentionally incorporate opportunities for dialogue, planning, assessing, challenging, and reflecting together, in order to not to fall into the trap of the giver and the receiver, of the superior and the inferior.

III. Seek to give and receive, learn and teach.
True relationship is a constant give and take. We all bring something to the table and we all have poverties that need to be addressed. This requires a spirit of humility, recognizing that we are mutually interdependent and need each other.

IV. Work to change unjust systems and structures.
When we focus on the relationship, ask open-ended questions, and learn from our partners, they invite us in to see and understand their reality – their joys and celebrations, as well as their sorrows and struggles. We begin to recognize the structures and systems that often keep people in poverty and are unacceptably unjust, and are challenged to gently confront our own role and contribution to this injustice, whether through our inaction, or through our consumer choices, our levels of consumption, etc. We are then called to work to change those systems and/or our own personal habits and activities, for the sake of those we have come to know and love (and others who share the same challenges).

V. Deepen our faith by experiencing the universal catholic church.
Partnership calls us more fully into the Church as one Body of Christ, with many unique parts offering different gifts, while united Christ. We are challenged by our partner’s witness of faith amidst adversity. Coming to know brothers and sisters from another culture, we learn new ways of understanding the Scriptures and see new ways of being a parish community. We experience our oneness in Christ, we enlarge our tent, and expand our sense of shared humanity, not only with our parish partner, but with all God’s people in the universal church.

All are welcome to attend our Mission Council meetings. Dates and times are announced in the parish bulletin under THIS WEEK IN OUR PARISH.

Our first mission visit to Los Toros was in February of 1987; what has happened since then? Los Toros has changed dramatically and we are happy to say we had a role in its growth. But we did not change the community. Through self-determination, intense community organization and collaboration within and outside of the community the community changed itself! We are proud of our sisters and brothers in Los Toros and we are happy they invited us to be part of their growth.

We embrace the fourfold Philosophy of:

Through the diligent sharing of ideas, resources and culture we seek to build a relationship of friendship, trust and charity. To find out how you may share in the mission, contact any of members of the Los Toros Mission committees or contact Judy Wendtlandt at rwendtlandt@wi.rr.com.

Mission Statement
To live the Gospel by sharing our spiritual, cultural, and material resources in solidarity with our sisters and brothers in Los Toros, empowering them to enhance their education, health, community development and spiritual growth.

Reflections on the new Mission Statement by Dave Bennett
I’d like to reflect on some of the keys words in this statement.To live the Gospel – We are inspired by the Gospel of Jesus Christ to reach out to those around us.Sharing – Our mission is one of sharing our gifts. This is not a one-way assistance program. Rather, our mission is for the people of St. Joseph Grafton and the people of Los Toros to share our respective gifts with each other.Solidarity – We work in solidarity with our brothers and sisters in Los Toros. Our goal is to become one with each other, sharing both our joys and our struggles.Empowering – Through our solidarity, we strive to empower the people of Los Toros to achieve their goals for the future. Our mission is rooted in a strong support of education that seeks to develop leaders for the community and enable the people of Los Toros to support themselves and their families.Dave Bennett – Chair, Los Toros Mission Council